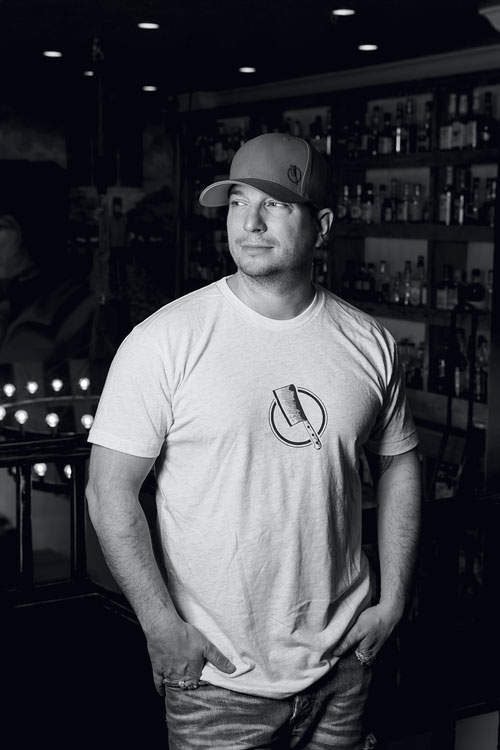 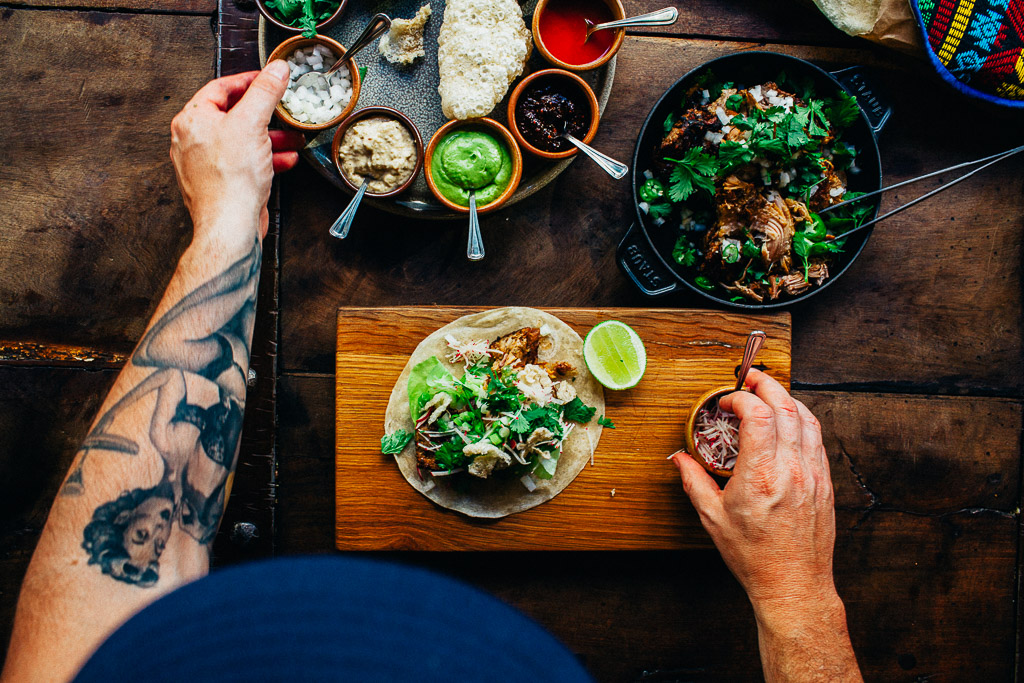 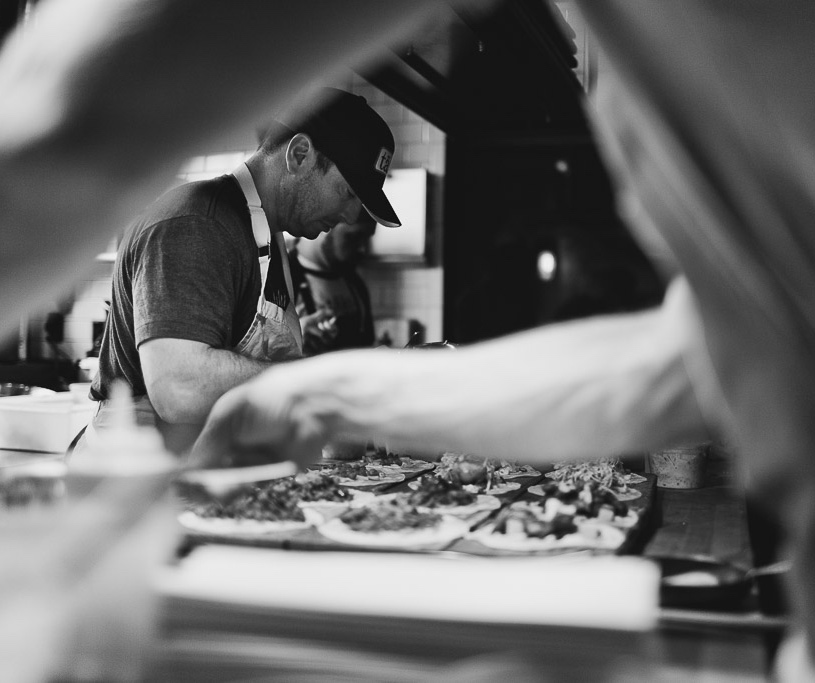 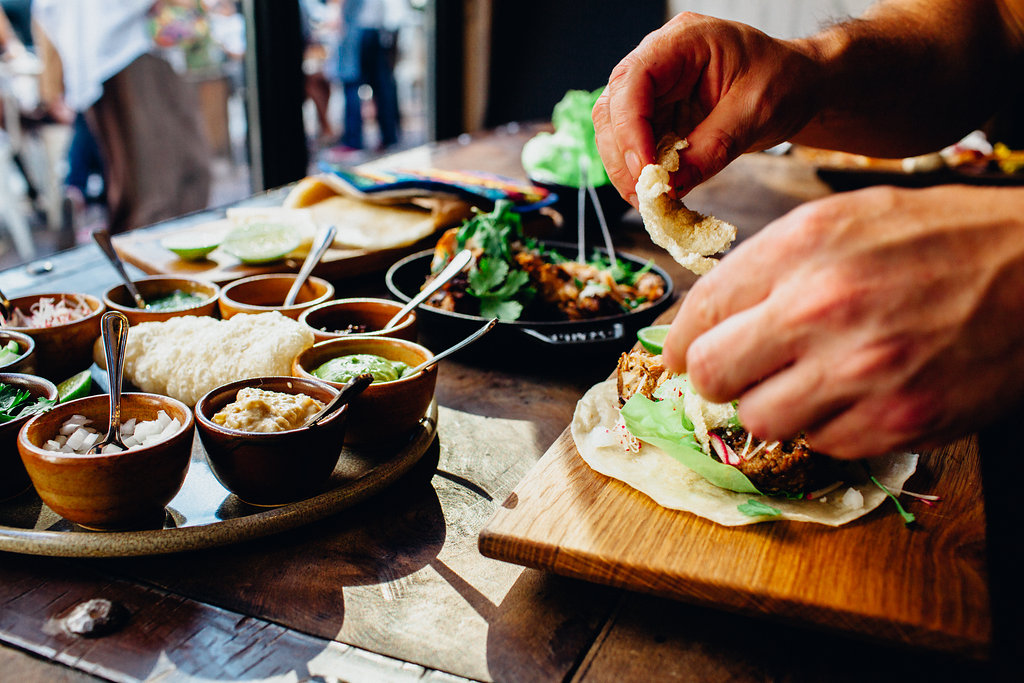 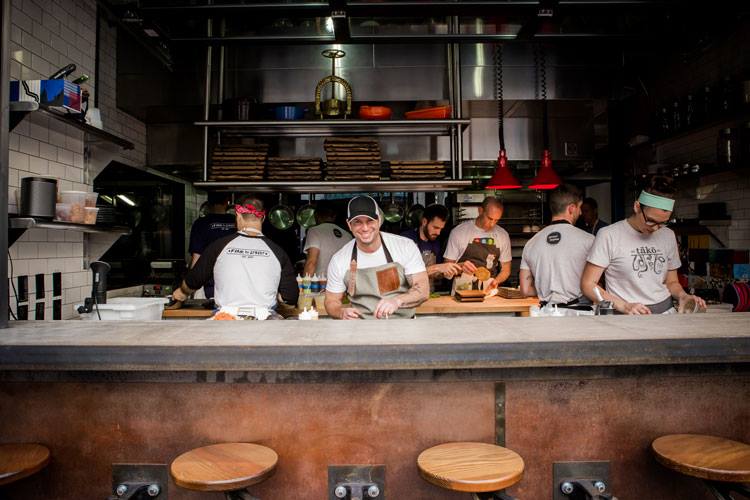 As a proud Pittsburgh native, DeShantz has worked to elevate the culinary landscape of his hometown, and brings creativity and innovation across the city through his nine restaurants: Meat & Potatoes, Pittsburgh’s first seasonally-inspired gastropub offering comfort food and classic cocktails; Butcher and the Rye, an acclaimed rustic Americana restaurant with shareable plates and an extensive whiskey program; täkō, a Japanese/ Mexican fusion approach to street food with a locally unmatched selection of tequila and mezcal; Poulet Bleu, a French-inspired American bistro; Fish Nor Fowl, an American Restaurant that celebrates an evolved perspective on thoughtful usage of ingredients and preparations; Coop de Ville, a fun and funky take on southern classics with a focus on fried chicken, and vintage arcade games & duck pin bowling; Gi-Jin, a modern take on a traditional Japanese hand-roll and gin bar; täkō tôrtä, a lively and family-friendly taqueria serving inventive Mexican street food with locally sourced ingredients; Sally Ann’s, a female-inspired vintage-style space serving hearty sandwiches, soups and salads, as well as carefully crafted cocktails and beer from the bar, along with signature coffees and lattes from the coffee bar. The DeShantz Group’s creativity never quits, as even more restaurant concepts are in the works and coming to Pittsburgh neighborhoods soon…

“chef deshantz has created unique restaurants that have helped reorient the focus from steel mills to the next food city.”

It all started with a passion for creativity, and a belief that restaurants should be escapist fantasies…

Richard DeShantz has always been a creative person with big ideas. His artistic talents led him to realize that cooking was a great way for him to express his creativity. He enrolled at the Pennsylvania Institute for Culinary Arts, and worked as a line cook at the acclaimed Hyeholde Restaurant in Pittsburgh under Chef Andrew Lise. There, he was exposed to a new spectrum of the culinary arts he had never seen before. What had begun as an outlet for creativity, soon grew into a passion for food and hospitality. Post-culinary-school, DeShantz traveled and worked in restaurants across the country. From Chicago to Colorado, Washington D.C. and Michigan – he honed his techniques and studied under some of the top chefs in the country including famed chef Charlie Trotter. After returning to Pittsburgh in the early 2000s, DeShantz opened Mediterra Bakehouse, where he managed operations and baked fresh bread and pastries daily. After four years, he was eager to bring more imagination into his kitchen and opened Café Richard in Pittsburgh’s Strip District. Two years later, he opened his first fine dining establishment called American Bistro Nine on Nine. As Pittsburgh’s dining scene began to change, so did DeShantz. After selling all three concepts, he was ready to open something on his own. In 2011, DeShantz opened the doors to his flagship restaurant, Meat & Potatoes.

DeShantz was ready to open a new restaurant on his own, when he met his business-partner-in-crime, Tolga Sevdik.

When Richard (Rick) would begin his day opening Cafe Richard, his soon-to-be business partner, Tolga Sevdik, was just ending his work day managing a nightclub in the Strip District, DejaVu. Around 4am, Sevdik would bring a six-pack of beer while DeShantz would make sandwiches, and the two would spend hours chatting. They became great friends, and one day, DeShantz asked Sevdik to help him organize his bills. So, Sevdik became a bookkeeper for DeShantz, and the rest is history…

To this day, Tolga Sevdik became co-owner and chief operating officer of what is now the Richard DeShantz Restaurant Group (RDRG for short). He’s originally from Turkey, and moved to Pittsburgh in 1995. He spends at least 70 hours a week rotating through the nine restaurants that make up RDRG, and tries to show his face at each restaurant every day.

In 2013, the DeShantz Group opened Butcher and the Rye, which was nominated two consecutive years in a row for “Outstanding Bar Program” by the James Beard Foundation, and was featured by Bon Appйtit as part of the “Steel City Renaissance.”

With all the success of the first two restaurants, DeShantz and Sevdik utilized that momentum to open their third restaurant, and brought on a friend and business partner, Kevin Kelly.

In 2015, Deshantz’s high school friend, Kevin Kelly, came on board to help open their third restaurant, täkō located in Downtown Pittsburgh. Kelly is a managing partner, and part owner in tдkō, Butcher and the Rye, Gi-Jin , and täkō tôrtä.

2016 continued with another restaurant opening – Pork & Beans. This restaurant was named one of the Best New Restaurants 2016 by Pittsburgh Magazine. In May 2018, the restaurant was featured on the Travel Channel’s show Food Paradise.

2018 was an even busier year, with the opening of both Poulet Bleu, a French-inspired bistro located in Lawrenceville, as well as Fish nor Fowl, an American restaurant located in East Liberty. Both restaurants were named Best New Restaurants in Pittsburgh by Pittsburgh Magazine in 2019.

In 2020, despite a global pandemic, the trend continued with the opening of two more restaurants – Coop de Ville, a southern table specializing in fried chicken with vintage arcade games & duck pin bowling located in the Strip District, as well as Gi-Jin, a Japanese inspired raw and gin bar located Downtown.

In 2021, the DeShantz Group expanded into new territory, Bakery Square in East Liberty, with täkō tôrtä. Giving a twist to the dark moody atmosphere of täkō Downtown, DeShantz decided to take that concept and give it a bright, lively, fast-casual update with a fresh, sustainably sourced take on Mexican street food.

In 2022, Richard DeShantz was inspired to create a new restaurant concept in his late mother’s memory. Named after his mother, Sally Ann’s offers a carefully curated menu of hearty creative sandwiches, fresh pastries, salads, soups, and a stunning brunch menu on the weekends from acclaimed female Executive Chef, Jamilka Borges.

The DeShantz Group won’t stop there, though. One new concept, Rib Room, will be coming to the Pittsburgh dining scene soon. With an estimated grand opening in the Fall of 2022, it will be an upscale, exclusive multi-course dinner experience with limited seating and required reservations. In addition to the intimate and private club-like atmosphere with candle-lit tables, the rotating pre-fixed menu is focused on prime rib and top-tier meat selections.

Another new concept will also be coming to Bakery Square in the near future. The yet-to-be-named Izakaya-style restaurant will be run by the executive chef of Gi-Jin. It will be a Japanese pub focusing on skewer grilled meats, curated cocktails, and craft beer.

Over the past eleven years, Deshantz, Sevdik, and Kelly have made their spaces highly popular eating and drinking destinations in the city of Pittsburgh.

They’ve also set an amazing example for the upcoming generation of the Pittsburgh’s chefs, bartenders and servers. Since the opening of Meat & Potatoes in 2011, many of the DeShantz Group employees have remained loyal to the restaurant group and still work at the restaurants. This is extremely impressive, considering how common and high turnover is in the culinary industry.

Looking into the future…

The DeShantz Group’s history of restaurants are intertwined with the history of the culinary scene in Pittsburgh over the last 15 years. Each DeShantz restaurant is an important staple in culinary scene and has had an influence on other restaurants in the area. The DeShantz Group continues to bring creativity and innovation to Pittsburgh by focusing on farm fresh ingredients, creatively themed concepts, and pushing boundaries.